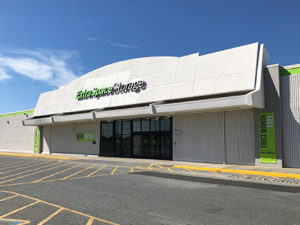 New York City — The national retail vacancy rate fell 10 basis points to 10.1 percent in the second quarter, according to New York City-based commercial real estate data firm Reis. This is the first time in which vacancy has declined since the first quarter of 2016.

For context, in the second quarter of 2018, the rate had risen 20 basis points to 10.2 percent and remained flat at that rate through the first quarter of this year. The tightening of available space is in contrast to the larger talking points about U.S. retail, which often claim a “retail apocalypse” is upon us as e-commerce continues to cause a sea change in how Americans shop.

The regional mall vacancy rate rose 30 basis points in the first quarter to 9.3 percent, the highest rate for mall vacancy since the third quarter of 2011, according to Reis. This came in the midst of a number of chains announcing store closures, including JC Penney, Payless ShoeSource, Charlotte Russe and Gymboree. The rate remained flat into the second quarter.

The performance of both malls and neighborhood centers will likely be affected by the continuing store closures throughout the second half of the year. Yet the stability of the trends this quarter shows how the retail sector has been able to withstand structural changes in the industry to some extent, argues Reis.

“As big-name anchor stores clear out, a number of stores continue to open,” says Victor Calanog, chief economist for Reis. “Grocery stores have been a leading new occupant of those vacant spaces over the past year or so, as have home/houseware stores, gyms/fitness, discount variety stores, discount clothing stores and even trampoline parks.”

When broken down by metro, the statistics show that few cities — 21 of 77 — experienced an increase in vacancy for the quarter. The figure was down from 28 metros in the first quarter. Metros with the highest vacancy rate increase include Columbia, S.C.; Charleston, S.C.; Birmingham, Ala.; San Antonio; and St. Louis. Metros with the biggest decline in vacancy include Chattanooga, Tenn.; Tacoma, Wash.; Colorado Springs, Colo.; Greensboro, N.C.; and Columbus, Ohio.

In sum, Reis argues that the retail sector has been able to ward off the worst of the “retail apocalypse” premonitions so far. On the supply side, empty big box stores have been converted into self-storage or sold to developers for redevelopment, former shopping centers have been demolished and there has been a general slowdown in building within the sector.

With minimal construction in the pipeline, vacancy rates were able to stabilize a bit this quarter, though the retail sector will likely see fluctuation ahead.

“A number of stores are still expected to close in the second half of the year and online shopping continues to offer stiff competition to brick and mortar stores,” says Calanog. “Older stores that are not keeping up with new business strategies or modernizing will likely continue to suffer and close in this tumultuous time. Still, the retail sector has been able to adapt to industry restructuring in a number of ways.”