Reprinted from The New York Times 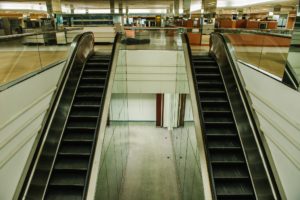 ALEXANDRIA, Va. — Karleen Smith used to work at the Macy’s in Landmark Mall, putting price tags on summer dresses, housewares and the latest styles of shoes.

On Saturday, Ms. Smith, 57, returned to her former store, not as an employer or a customer, but as a resident.

The former Macy’s in this vacant shopping mall outside Washington has been transformed into a homeless shelter.

“It’s weird to be moving into this building. I used to work here,” she said inside the shelter’s common room, which was once the men’s department. “It’s called survival.”

As shopping malls struggle to survive in the era of Amazon, communities are looking for new uses for all the retail space. Some empty stores are finding another life as trampoline parks, offices, college classrooms, and churches.

At the vacant Macy’s in Alexandria, the Carpenter’s Shelter, a nonprofit group, moved into its temporary home last weekend, 15 months after the last shopper rang out. The former store now provides 60 beds, hot meals, and showers for families and for single men and women who are having trouble finding a place to live in a city with a scarcity of affordable housing.

The Landmark Mall was once at the vanguard of shopping.

Opened in 1965, the mall housed the region’s most fashionable department stores, Hecht’s, Woodward & Lothrop and Sears & Roebuck. Boys came to buy their first suit at the haberdasher, and teenage girls could get their shoes dyed to match the color of their prom dress.

Alexandria’s former mayor William D. Euille remembered playing the clarinet in the high school band at the mall’s opening ceremony. “It was the economic engine of the city,” he said.

Landmark tried to adapt over the years. It began as an open-air shopping center and went through an overhaul in the 1980s to enclose the property.

Eventually, the mall succumbed to retail’s propensity to chase after newer, flashier spaces. Developers built larger malls with more upscale brands nearby in Pentagon City and Tysons Corner, siphoning customers away from Landmark.

Landmark’s original anchor stores either have been bought out, went bankrupt or are clinging to life — like many in the retail business. Last year, 6,985 stores closed in the United States, a record number, according to Coresight Research, a retail analysis and advisory firm. This year, retailers are on a pace to close roughly 10,000 stores.

In its final years of operation, the Landmark’s tenants included two dollar stores and a tax preparer. Only the Sears is still operating. A lone, blue inflatable figure dances on the store’s roof, beckoning shoppers.

To read the full article, visit the link here: https://www.nytimes.com/2018/06/13/business/macys-homeless-shelter.html?rref=collection%2Fsectioncollection%2Fbusiness&action=click&contentCollection=business&region=stream&module=stream_unit&version=latest&contentPlacement=1&pgtype