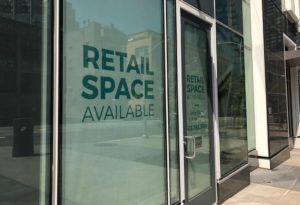 Coast to coast, bustling retail meccas used to embody a decidedly American pastime: shop till you drop. But empty storefronts across the U.S. have cropped up in places that go far beyond the “retail apocalypse” that has battered suburban malls — and some municipalities are fed up. From retail corridors nestled in some of New York’s trendiest neighborhoods to wealthy bedroom communities just outside of Boston, vacancy signage is becoming more common than glitzy placards announcing a big sale. Bisnow/Julie Littman Empty ground-floor retail space in downtown San Francisco Local governments, wary of landlords who choose to keep their properties empty — sometimes for months and years in the hopes of landing a deep-pocketed tenant — are now responding by exacting financial penalties against these proprietors.

“There was uproar from residents over what these [landlords] were doing and how they were getting away with murder,” said Ali Carter, the economic development coordinator for Arlington, Massachusetts. “

Residents just see a vacant storefront and wish it was a coffee shop or bookstore. They’re peeved.” Arlington began its measure in early 2017. It requires landlords to register with the city and charges them $400 annually for each vacant storefront. When the fees were first levied, there were 17 empty storefronts in Arlington Center. Only six remained by the end of the year.

Larger cities, like New York and Boston, are mulling similar measures. Retail vacancies in Manhattan’s West Village neighborhood were up to 11.3% in June — and some parts of SoHo have even hit 20%. In Boston, vacancy rates on the city’s high street of shopping, Newbury Street, were around 10% at the end of 2017. A retail vacancy rate of 5% is generally accepted as the industry standard for a healthy market, according to brokers. But landlords and developers suggest vacancy fees are not the best solution.

“It’s forcing capitulation, and it’s the government injecting itself into the marketplace to get a result they don’t understand,” Fisher Bros. partner Winston Fisher said. Fisher, whose family-run company is one of the largest developers in New York, and others suggest more market-driven solutions, such as pop-up retailers or different leasing agreements, to fill those empty spaces may be better for the long-term support of retail in a community. But even as landlords explore such alternatives, several cities are moving forward with vacancy fees.

Taxation Until Reactivation Wikimedia Commons/Tim Pierce The Capitol Theater building in Arlington, Mass. Other cities are hoping to replicate Arlington’s visible success. Carter has been called to testify on the city’s measure in municipalities across the country. She said, however, each region has to tailor its vacancy regulation to fit market conditions.

“Whatever sort of solution they come up with has to be tailored to their community,” she said. “For the 700 or so businesses in our town just outside of Boston, this is not Greenwich Village. It’s a totally different scenario.” New York City Mayor Bill de Blasio has proposed a fee or tax to penalize landlords with vacant retail space.

Other city leaders are advocating a vacancy tax on commercial strips. In San Francisco, neighborhood commercial districts such as the Castro and the Mission District are seeing an increase in vacancy rates, according to a February report by the San Francisco Office of Economic and Workforce Development. Sales tax revenue slowed between 2015 and 2016 and the demand for ground-floor retail space has declined.

In response, Supervisors Aaron Peskin and Jane Kim are leading the fight for a vacancy tax. Kim told hyperlocal news site Hoodline the Mayor’s Office of Economic Development and small business commission should do more to fill vacant spaces. She would consider a vacancy tax “to encourage landlords to rent out these spaces.” Peskin and his staff told Bisnow he is working on a draft to include a vacancy tax on a future ballot.

Arcadia, about a 17-mile drive northeast of downtown Los Angeles, is not proposing a vacancy tax but, like many cities across the nation, is grappling with how to deal with empty storefronts. “Some cities have poor opinions of landlords because the space is vacant,” Bacani said. “But implementing a tax will only have a negative effect and further hurt relationships.”